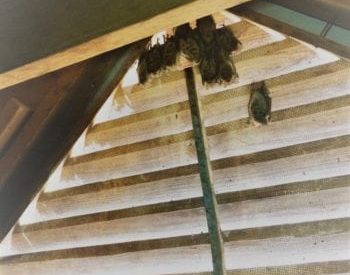 Bats are a special type of mammal – they are the only mammal that can truly fly! No, they are not rodents with wings. Bats are actually part of a different order than rodents called Chiroptera. Bats are extremely important to the environment and North Carolina’s agriculture. Bats are pollinators, seed-dispersers and pest controllers. A pregnant female can eat up to 100% of her body weight in insects per night. Because of their ability to consume as much as they do, it is noted by researchers that their pest control services save the U.S. agriculture over $3.7 billion per year.

What do bats do in the winter?

As the season changes and the temperatures get colder and daylight hours diminish, insects will “overwinter” either by hibernation or diapause. Diapause is a delay in physical development that is triggered by adverse environmental conditions. Overwintering insects mean a decrease in food sources for bats. When a food source disappears, all animals must adapt to survive. This means they have two immediate choices: migrate or hibernate (or in the case of bats, go into a state of torpor).

Migration is the movement of an animal from one location to another. In winter, some bat species (typically tree-dwelling) will migrate to warmer climates where food and other resources are more abundant.

Hibernation is a state of dormancy. The animal’s metabolic activity greatly reduces, which enables for the animal to not eat for extended periods of time.

Torpor: Bats do not go into true hibernation. Instead, they enter a state of torpor that allows them to greatly reduce their metabolic activity, but still permits occasional wake periods on warmer days.

Bats find comfort in our warm attics throughout Raleigh, Durham, Chapel Hill and the rest of the Triangle. It provides the shelter they need to survive the winter, and they take advantage of the area to go into torpor.

Should I remove bats from attic?

There are a couple of reasons why you should not attempt to remove the bats in your attic on your own:

What diseases are associated with bats?

There are two main diseases that come to mind when thinking of bats. The first, and the one most people associate with bats, is rabies. While only about 2% of bats tested in North Carolina test positive for rabies, all bats should be given space and avoided in case they are in the infected group, as rabies is a very serious and life-threatening disease if contracted. If a bat has potentially contacted a person or pet, it should be captured by a professional and tested for rabies; the local health department should be called if medical treatment is required.

The second, and lesser known, disease associated with bats is histoplasmosis. Histoplasmosis is an infection caused by a fungus in bat droppings (aka guano). When inhaled, the fungal spores infect the lungs and can cause flu-like symptoms and even skin lesions.

Why are bats protected?

Bat populations have drastically declined in the U.S. over the last decade due to changing habitats and a fungal disease called white-nosed syndrome (WNS). The US Fish and Wildlife Service estimates that more than 5 million bats have been lost due to WNS. This syndrome causes a bat’s energy use to increase to the point that it disrupts their state of torpor in the middle of winter to eat. Since their food sources are scarce during these months, and their fat reserves are depleted from the energy increase, the bats die from starvation. This fungal disease causes other changes in the body such as dehydration and acidification. WNS is aptly named as the fungus creates a white layer on the nose and wings of the animal.

Of the 17 species of bats in North Carolina, 3 are listed as federally endangered, 1 is listed as federally threatened, and 10 are listed by the NC Wildlife Resources Commission (NCWRC) as a Species of Greatest Conservation Need. Because of the massive loss in these populations, there are many restrictions on how to handle bat removal.

What time of year can you remove bats from attic?

Due to the restrictions in place to protect them, bats cannot be truly evicted until August. The NCWRC has a moratorium on bat evictions from May 1 through July 31. This has a lot to do with their breeding habits. Bat young (pups) are typically born between May and July and need their mothers to survive until they are fully weaned and can fly on their own, usually after 3-4 weeks.

Throughout the rest of the year, certified wildlife technicians can seal up most entry points in your attic except for the entry point most used. This will prevent any temporary bat housemates from getting close to you or your family, but also will allow mother bats to return to their pups after feeding. In August, when the pups are able to fly on their own, a bat valve can be set at the last entry point. This will allow bats to exit your home but not return. Once all bats are out of your home, technicians can remove the bat valve and close the final entry point to keep the critters out!

If you are hearing or seeing signs of a bat infestation, do not hesitate to call 919-382-0651 to schedule an appointment with a certified Critter Control of the Triangle technician. We service Raleigh, Durham, Chapel Hill, Apex, Cary, and the surrounding cities in the Triangle.