Muskrats Removal in the Raleigh Area 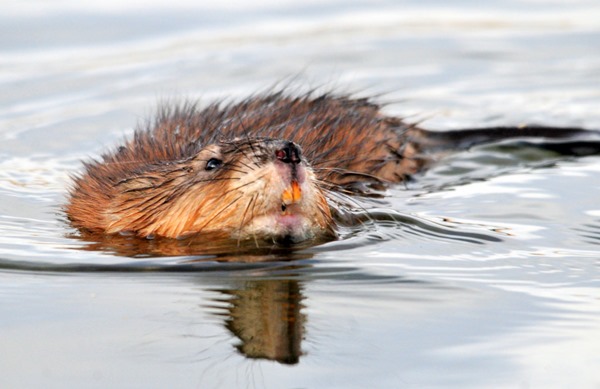 The muskrat is a large rodent with many similarities to the beaver. The most obvious differences though are that muskrats are smaller and have thinner tails when compared to their beaver cousins. Muskrats are found near water and are not seen much during the day as they feed mostly at night. They have large, webbed hind feet, used for swimming and smaller, tougher front feet used for digging and gripping food. Muskrats have small eyes and short, curved ears.

Muskrats are commonly found throughout Canada, Alaska and most parts of the U.S. They make their homes in and around creeks, rivers, ponds and lakes. Muskrat dens are either made of aquatic plants like reeds and cattails or are burrowed into the banks of whatever body of water they inhabit.

Burrowing activity is often the main reason they are considered pests. Because they burrow into banks of creeks, rivers and lakes they can pose structural problems or cause serious erosion. Dams, dikes and roadbeds are often affected if muskrats burrow into the dirt around them. They are also known to leave the water and seek after corn or soybean crops where they can also cause damage. Although not common, muskrats will attack if cornered and have been known to bite pets.

Critter Control of the Triangle has certified technicians and specialists who are knowledgeable on the tools needed to remove muskrats off of your premises. Animal trapping is our specialty, and our professionals know how to stop and identify muskrats in order to prevent future damage. Call us today at (919) 382-0651 for assistance.

Though the chance of people contracting a disease from muskrats is low, muskrats can be infected with diseases such as tularemia and leptospirosis.

We service throughout the Triangle area including Raleigh, Cary, Durham and Chapel Hill in North Carolina. What is a rodent? This sounds like a pretty easy question. You probably even just had a few examples... It’s not a reality you want to consider — dirty rodents wandering your home at night — but rats... How To Tell If There Are Beavers On Your Property

It’s not every day you see a beaver in the Triangle area. Because of that, people are often more...