How to tell the difference between moles and voles

These are small rodents that appear very similar to mice.  They are still slightly larger and feed mainly on plants, however they have been known to eat insects and fungi.  They have fairly short tails and small eyes and ears with a rather rotund and stocky body similar.  They are in the same genus as lemmings and muskrats.  Voles can reproduce incredibly fast and breed large populations; female voles mature in 35 days.  They will also live in nearly any habitat, certainly any habitat in North Carolina. 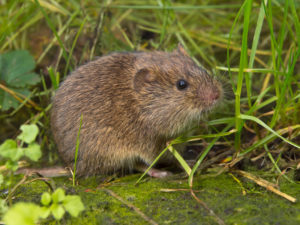 There are three mole species in North Carolina but only two reside in The Triangle, the other species lives in more elevated areas such as the mountains of Western North Carolina.  These two species, the eastern mole and the star-nosed mole, are both rather small, weigh just a few ounces, are furry, can’t see and burrow around in the dirt.  The star-nosed mole however has a strange nose with 22 appendages radiating from the center.  These are used for feel because they live almost their entire life in the dark.  Star-nosed moles can swim and typically live in wetter, swampier areas while eastern moles live in lawns, pastures and meadows. The differences between moles and vole

The main difference is the damage caused by either animal.  While moles only eat insects (which are often good insects) voles eat plants, which means they can cause severe damage to gardens, trees and shrubs.  Moles spend the majority of their time underground but always need a place to deposit the tunneled dirt – these become the dreaded molehills.  Molehills are easy to identify because they are simply mounds of loose soil deposited at intervals from one another in a certain area.  Voles dig many short burrows and often shallow burrows to make nests.  These burrows can become more complex depending on the food sources around, for example many closely spaced holes can be found in garden areas where they’re eating the plants, especially vegetables.  These holes are connected by aboveground trails and tunnels that are usually protected by a layer of grass or other ground cover.  So unlike moles that tunnel below the surface, these runways are above ground and look like tiny little canals that can spiderweb around a yard.